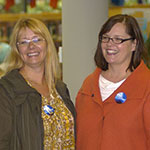 Two trustees of the Minnesota State Colleges and Universities visited the Brainerd campus of Central Lakes College today. Dawn Erlandson (left) and Margaret Anderson Kelliher met students in the Community Colleges for International Development (CCID) program, as well as student senate leaders, student tutors, and staff in fine arts, athletics, and support services such as the Learning Commons and the Bridge. They toured the Jon Hassler Library, Rosenmeier Center, and Humphrey Center. The trustees had been attending a fall retreat nearby and took time before returning to their home communities to see one of the state's foremost community and technical colleges. This was the first visit to CLC's Brainerd campus for Erlandson and Anderson Kelliher, who are among the four newest appointees of Gov. Mark Dayton. Other recent appointees by the Governor are Ann Anaya, Alfredo Oliveira, Maria Peluso, and Alexander Cirillo.
Images: http://www.flickr.com/photos/58518185@N04/
Posted by CLC Public Information Specialist