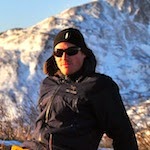 On Thursday, December 4, 2014, at noon in the Chalberg Theater, Central Lakes College will be hosting its fourth event in this year's Cultural Thursdays Series.  Staples native Michael Bach will join us viavideo conference. He will speak on his work in assisting the Alutiiq peoples of southern Alaska to revitalize their language and culture.As a senior in High School, Bach lived in the Canary Islands (Spain) off the coast of Africa as an American exchange student.  He then went on to the Monterrey Defense Language Institute, where he learned the Pashto language and served our nation in Military Intelligence.  He went on to earn his B.A. in Languages and International Studies, at the College of St. Scholastica and his M.A. in Northern Studies from University of Alaska Fairbanks this May, 2014.


According to the Alutiiq Museum Spring 2014 Bulletin (Vol. 18, No. 4), Michael “Nanit’sqaq” Bach joined the Alutiiq Museum crew on May 19 to serve as Language Archives Specialist and project manager. The Alutiiq Museum just received its third National Science Foundation Documenting Endangered Languages (DEL) grant. This new three-year archives improvement project will increase access to Alutiiq language recordings for both researchers and community members.  Bach is now an Intermediate fluent Alutiiq speaker and has extensive experience working with archival resources at both the Afognak Tribal Library and the University of Alaska Fairbanks archives. He will complete digital transfer of audio and video recordings, develop the archive catalog, produce finding aids, and assist in fieldwork and outreach activities. This has been done via language club sessions, radio broadcasts, pod casts, museum events, efforts on the part of the Alutiiq elders as well as others and the development of language archives.

In the abstract to his published Master's Thesis on Alutiiq Language Revitalization, Bach writes "Language Club is one of many Language Revitalization initiatives currently being used to reclaim space for Alutiiq, a highly endangered Alaska Native language. Since 2003, Language Club has been a site of learning and sharing for both Alutiiq language learners, and Elders. [...] Themes and subthemes identified include: community, family-like structure, culture and tradition and healing. Using Tribal Critical Race Theory (TribalCrit) to better understand these themes, we find that Language Club functions as carved out space within the broader community where participants are able to engage in decolonization and resist hegemonic domination by the broader community. (Bach, Michael James. “Community space for decolonization and resistance:  Kodiak Alutiiq language club participant perspectives,” Thesis (M.A.) University of Alaska Fairbanks, 2014. http://hdl.handle.net/11122/4537)
Posted by CLC Marketing and Public Relations Office