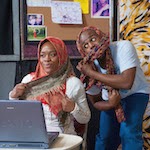 The Office of Diversity & Tribal Relations is bringing another Mixed Blood Performance to Central Lakes College at 10 a.m. on Tuesday, April 21 in the Dryden Theater.
This hour-long event is free and open to all faculty, staff and students. The performance is titled "Hijab Tube” and it’s a production of Minneapolis’ Mixed Blood Theatre.
The performance explores American-Muslim identity and offers a uniquely entertaining and eye-opening perspective on Islam in 21st century America. The story centers on 20-year-old Rubiya, a second-generation American-Muslim. Prompted by a college class discussion, Rubiya is considering wearing the hijab (the traditional head covering of Muslim women) and takes her questions about it to YouTube. The range and variety of responses she receives offer illuminating perspectives on the great diversity of Islam in contemporary America.
Hijab Tube was written by Seema Sueko on commission from Mixed Blood and premiered in 2009. Aailyah Habeeb leads the cast of three. William Partlan directs the production.