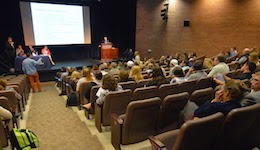 State officials are about to start talks on funding higher education in Minnesota. And as more and more students struggle to find enough money to pay for education after high school, leaders want input.
That’s one of the messages Rep. Bud Nornes, chair of the Minnesota House Committee on Higher Education Policy and Finance, had for folks Wednesday during a Rosenmeier Forum held at Central Lakes College.
The event was called "Access, Equity and Appropriations: The Financing and the Future of Higher Education in the State of Minnesota.”
Central Lakes College students, staff, as well as representatives from the city of Baxter, city of Brainerd, Crow Wing County, and area high schools, packed into the Chalberg Theatre at CLC's Brainerd campus to hear the forum.
Other speakers included Laura King, Vice Chancellor and CFO of MnSCU, and Dr. Toyia Younger, Associate Vice Chancellor of MnSCU.
It’s vital the education community start conversations now about the topics, said Rosenmeier executive director Steve Wenzel.

"This topic could not be more timely. Minnesota lawmakers are working out details on this effort as we speak and we'll get in on the ground floor of this very important issue,” he said.
Currently, Gov. Mark Dayton is proposing $142M for the Minnesota State Colleges and Universities System (MnSCU), as requested.
During Wednesday’s forum, Nornes said he wanted input from the students and staff on the topic.
Nornes said paying for a higher education isn’t as easy as when he went to school in the early 1960s when it took two summers of working on a farm to cover the bill.
“It’s a different time and students are looking at a lot of different challenges,” he said.
One of the biggest challenges: Student debt.
The average college student will graduate with about $30,000 in student debt, he said.
Nornes’ goal is to have to state cover half of the bill for college, with the student covering the other half.
Further, in the House’s higher education bill, he wants to see tuition lowered for technical students.
The state is at a crossroads, King said. “We have to make important decisions on how to move forward,” she said.
Every year, about 410,000 students attend the 31 colleges and universities in the MnSCU system.
Of those:
* 52,000 are first generation students.
* 62,000 are American Indian or students of color.
* 99,000 are low-income (Pell eligible) students.
* 11,000 are veterans.
The MnSCU system serves more students in each of the categories than all of Minnesota’s other higher education options combined, King said.
And when it comes to students of color and American Indian students, that number is only getting bigger, she said. Low-income student populations have also seen a jump in the last decade.
The population density of the state also has an impact, she said.
Central Minnesota is expected to see an uptick in population looking forward, while other parts of the state are seeing a decrease, King said.
“That has implications on higher education in Minnesota,” she said.
Still, King said MnSCU schools are far more affordable than private colleges in the state. And MnSCU is also ranked 38th of 50 states in administrative spending each year.
Younger said that while state leaders are concentrating on the financial costs of higher education, her job is to focus on making sure each student is taking the right courses, has the best support and is successful.
That comes through:
·      * Fostering student learning on campus.
·     * Implementing a variety of student service initiatives.
·     * Addressing factors that impact success, like being a first generation student, low income, or a student of color.
In the audience Wednesday, about a dozen students said they were the first member of their family to go college.
In closing, Nornes offered some advice to high school students to better prepare for higher education: Set some money aside and save it.
“It should not be the first day of college and you borrow as much money as you can,” he said. “Be prepared. It’s not going to be inexpensive.”

The Rosenmeier Center for State and Local Government sponsored the forum.