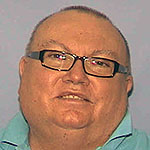 Dennis Lamberson, 61, Central Lakes College Theatre instructor, passed away Jan. 8 after suffering stroke last February. Dennis had 43 years of experience as an actor, director, designer and educator. Starting at the college in 1987, he served as director, designer and playwright. During his years of service to the college, Dennis designed and/or directed over 400 productions for regional and educational theatres throughout the U.S. He taught costume design, creative drama, children's theatre and theatre for a diverse population. He helmed the annual senior revue "Geritol Frolics" from 1991-2001. For his work with the Theatre for A Diverse Population program he received the 2002 VSA Minnesota Jaehny Award for promoting the creative power of populations with disabilities and the 2005 International Leadership Award from the Chair Academy. He received the 2005 International Exemplary Leadership Award from The Chair Academy of Mesa, Ariz. In 2006 he was one of 32 scholars chosen to attend the Oxford Round Table at Lincoln College in Oxford, England, where he was a presenter of "Creative Drama for the Young Learner." He graduated from Ventura (Calif.) College. He received post-graduate degrees in drama from California Lutheran College in Thousand Oaks and California State University-Chico.

Dennis was a perfectionist who nevertheless respected individuals for whom theatre acting and appreciation had yet to be fully developed. He led upstart actors and audiences to a fuller understanding of what makes drama effective and important. He also worked faithfully behind the scenes, where his expertise put the spotlight on costumes and sets as well as special effects. His gifted devotion to college theatre in our community and our region will be remembered.
Posted by CLC Public Information Specialist