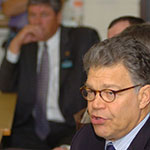 Hours before President Barack Obama’s State of the Union address, Central Lakes College President Larry Lundblad and wife Karen were participants in activities leading up to it. The Lundblads were guests of Sen. Al Franken, D-Minn. They had dinner with Rep. Rick Nolan, D-Minn., Monday night and with Franken on Tuesday. He toured the Capitol Monday and the White House on Tuesday. President Lundblad was chosen to attend the speech as a leader for fostering partnerships between business and education that are designed to make sure workers have the right training for available jobs.
CLC has been involved with the Brainerd Lakes Chamber’s Bridges Career Academies and Workplace Connection and participating Brainerd area school districts. The educator said both Franken and his wife are very aware of the business-education partnerships in the Brainerd area.
President Lundblad, said Senator Franken, is statewide leader in forging partnerships between schools and businesses to make sure students are prepared to join the work force.
“I was happy to hear President Obama highlight the need for work force training in his address,” President Lundblad said. “Higher education can play a huge role in our economic recovery by providing the education and training our workers need to compete in the new economy. I’m thankful to Senator Franken for inviting Karen and me to the State of the Union.”
Sen. Franken also says he will pursue legislation on work force development that will strengthen the relationship between colleges and businesses to help make sure that students get the education they need to fill open jobs.
At Sen. Franken’s invitation, Lundblad spoke Wednesday, Feb. 13 at a Senate meeting on effective ways to create jobs and put people back to work. Franken also spoke at the Senate Democratic Steering and Outreach Committee about the need to close the skills gap during today’s meeting. He will pursue legislation on work force development that will strengthen the relationship between colleges and businesses to help ensure students get the education they need to fill open jobs in Minnesota and across the country.
“I was honored to join Sen. Franken at the meeting and to speak about the successes we’ve had at Central Lakes College in closing the skills gap and putting people back to work,” President Lundblad said. “Our program is successful because it’s a partnership between the college, local employers, and local school districts like Brainerd Public Schools. By working together and starting early, we’re able to prepare our students for great job openings right here in our community.”
Posted by CLC Public Information Specialist