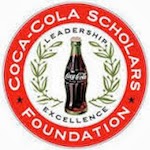 “We thank the Coca-Cola Scholars Foundation for their vote of confidence in community college students by investing in their futures,” said Dr. Rod Risley, Executive Director of Phi Theta Kappa. “Their support is especially welcome during this challenging economic climate, as more and more community college students need additional resources to help them complete their degrees.”

Phi Theta Kappa Honor Society, headquartered in Jackson, is the largest honor society in American higher education with more than 1,285 chapters on two-year and community college campuses in all 50 of the United States, Canada, Germany, Peru, the Republic of Palau, the Republic of the Marshall Islands, the Federated States of Micronesia, the British Virgin Islands, the United Arab Emirates and U.S. territorial possessions. Nearly 3 million students have been inducted since its founding in 1918, with approximately 131,000 students inducted annually.