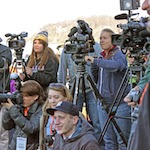 The 67th annual Governor’s Fishing Opener, hosted by Governor Mark Dayton and held at Grand View Lodge on Gull Lake was the media “hot spot” in Minnesota this past weekend.

Along with the multitude of seasoned media professionals, two CLC Videography students recorded the events at Grand View Lodge for KARE 11 News. KARE 11 has contracted with CLC Videography to act as a bureau in this region when they need additional coverage.

KARE 11 used their footage in the 6:00 pm newscast and again in the 10:00 pm newscast. Both students were credited as the photojournalists.