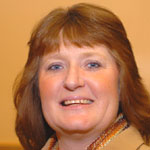 Brainerd resident Julie Jo Larson, an honor student at Central Lakes College, has been recognized by state organizations with scholarships she said qualified students shouldn’t overlook for themselves. “It is my hope that I can inspire more students to take the time and fill out the scholarship applications,” she said. “There is money out there for students who are willing to try.” Larson was recently named to the 2011-12 All-Minnesota Academic Team.

The All-Minnesota Academic Team was introduced 20 years ago to honor two-year college students for their leadership, academic achievement, and community and college service. In 1994, state academic teams were introduced as a way to provide scholarships and scholastic recognition to National Honor Society members while promoting excellence at two-year colleges.

Larson, who will earn her Honors Associate in Arts degree from CLC in May, is president of CLC’s Upsilon Omega chapter of the Phi Theta Kappa national honor society for two-year colleges.
A Social Work major who plans to attend the College of St. Scholastica, she also has been named a recipient of the $1,000 Minnesota TRiO Scholarship. TRiO is a student support service advancing equal educational opportunity and promoting diversity in America’s post-secondary institutions.
Larson has also received the following scholarships while at CLC:
2012 Minnesota State College Student Leadership
2012 Joseph Plut Literature
2011, 2012 Presidential
2012 August T. Boberg
2011 American Association of University Women
Larson, 47, carries a 4.0 grade point average. She is an active tutor of other CLC students who are enrolled in six different course areas. She served on the Governor’s Economic Forum panel during an event the Brainerd campus. She organized two study groups for students, mentored a student with autism, and has been a volunteer for the Center for Lifelong Learning at CLC.
In the fall of 2010 she became a charter member of the new Honors AA degree cohort at CLC, one few non-traditional students among the contingent of qualifiers.
Until enrolling at CLC, the New Ulm native hadn’t been a college student for more than 20 years, having been named Student of the Year at Mankato Technical Institute in 1987.
Posted by CLC Public Information Specialist