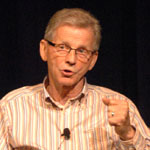 Bob Gross, former Brainerd Schools superintendent, presented a program on education from his global perspective Monday in the Center for Lifelong Learning series at Central Lakes College. “Education — Around the World and Back Again” filled Chalberg Theatre for the 4 p.m. program co-sponsored by the Brainerd Community Foundation. Jim Hunt, former high school principal, served as moderator/interviewer. After leaving Brainerd in 1999, Gross was hired as superintendent of the Singapore American School and later worked as an educator for the U.S. State Department, resulting in his visiting somewhere between 40 and 50 countries in the last decade or so. Unlike the public sector, he said, where 75 to 80 percent of the population did not have children in school, the private school in Singapore was run by a school board that was selected by the students’ parents. Those parents, Gross said, were achievement-oriented with high expectations for their children’s academic progress. Behavior problems, were few, he said, because the school could simply ask problem students to leave.
The career change from Minnesota school superintendent to an administrator for American schools abroad has apparently suited the 69-year-old Gross, who professed enthusiasm for his continuing endeavors in education.
“I enjoy work,” he said, confessing that he never really developed hobbies.
Gross advised other individuals to “do what feels right to you” when it comes to retirement.
After eight years in Singapore, he worked as regional education officer for Europe with the U.S. Department of State’s Office of Overseas Schools, which supports diplomatic communities. Gross resigned that post in April and has accepted offers to work with schools in Abu Dhabi, United Arab Emirates and Vienna, Austria in the coming years.
In 2006, he was named International School Superintendent of the Year by the Association for the Advancement of International Education.
The biggest changes he experienced as a school administrator were not brought about by the change in countries but the changes from working in the private sector, compared to the public sector. Parents wanted their children to attend the Singapore American School and were very supportive of the school’s mission.
Gross was Brainerd School District superintendent for 18 years. He began his teaching career in Waubun, where he taught classes in business law, typing, physical education and health. In the Brainerd School District he was assistant high school principal, junior high principal, assistant superintendent and superintendent between 1968 and 1999.
In his eight years in Singapore he never experienced one news story, letter to the editor or editorial that was disparaging of his teachers.
Those teachers were revered, he said, even though they “were not one bit better than we had in Brainerd.”
It’s difficult to educate children in a situation where teachers are constantly taken to task, he said. And in his opinion, he said, much of the criticism teachers face is unfair. The negative criticism of teachers, he said, doesn’t encourage young people to enter the field of education.
Portions of this report from Brainerd Dispatch newspaper
Posted by CLC Public Information Specialist