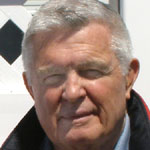 Former Central Lakes College (Brainerd Community College) coach Al Holmes will receive a Lifetime Service Award from the National Wrestling Hall of Fame and Museum at its Minnesota Chapter Banquet May 5 in Austin. He was a wrestling and football coach for 36 years at Minnesota State University Moorhead, Mayville State College, N.D., Michigan Tech University and Brainerd Community College. Al was CLC's head football coach from 1986-1993 and posted a 40-28 record. The Raiders were state runners-up in 1991 and advanced to the R.C. Cola Bowl in Cedar Falls, Iowa, in 1988, losing to Iowa Central 28-7. He was an assistant coach at CLC from 1994 to 1997. He began his coaching career at Frazee in 1959 and also coached at Fergus Falls. He was a member of Moorhead High School’s and Moorhead State’s first wrestling teams. Holmes is a member of the MSUM, BCC and Minnesota Community College Conference halls of fame. Holmes will have his name placed in the John T. Vaughan Hall of Honors at the National Wrestling Hall of Fame Museum in Stillwater, Okla. Tickets may be obtained from Spencer Yohe, chapter president, at syohe@acegroup.cc or (507) 495-3213, or use credit card at http://mn-nwhof.ticketleap.com. Social hour is from 4-5 p.m. Dinner and program follow at 5 p.m.
Al Holmes interview
By Tony Sailer, Brainerd Daily Dispatch, Sept. 4, 1999


Football and respect
"It sounds corny, but I firmly believe there is no greater place to be than the football practice field," he said. "Everybody looks for acceptance and self-respect.
"Your name, money, religion, nationality, whatever, you leave it all in the locker room. You are accepted or rejected on what you do or don't do.
"The most important thing an individual can learn is self-respect. Self-esteem is the most important thing you can have. They can steal a game from you but they can't steal your self-esteem unless you cooperate with them."
Athletics as a classroom
"Some people look at athletics as a frill," said Holmes. "The practice field is a laboratory. It's one of the most important classes there is.
"Most people get fired because they can't get along (with co-workers). What you learn in practice is that you are not the most important thing, the organization is. Sometimes you have to conform to make the unit successful. You have to cooperate with some people you don't even like.
"You can't teach that in a classroom."
Competitive instinct
"It still hurts to lose but when you sit down and reflect on it it's a little easier to handle," said Holmes. "When I started coaching ... I wanted to win. But you learn after many years the wins and the losses are all just a blur. Nobody is really concerned about that. It's the people you had a chance to work with.
"We started an informal reunion (at Moorhead State) ... We get together and tell a lot of lies. In three years only one time did anyone ever mention anything about his exploits and he found out no one was even listening or cared. We get together because of a bond of comradeship. It's a common effort. You learn to respect each other if the effort has been a good one."
Have athletes changed?
"I don't think human nature has changed much," said Holmes. "When I first got into coaching I went in with a whip and a chair and was going to shape people with intimidation. Discipline is important but you can't lose sight of the human factor. If (people) feel good about themselves they will perform better than if you browbeat them.
"Specialization, without question, will result in a better athlete in a certain sport but it may cost them many lessons. You get isolated; insulated from the real world. Not like a three-sport athlete ... As the seasons change you change your surroundings, your coaches and you are with different athletes.
"What I used to consider a workout to today's kids is a warmup," continued Holmes. "Kids today are willing to work harder and put in longer hours. But I don't think they are as patient. They want instant success. They are not willing to battle adversity as long. They are not willing to fight for a year or two for a chance to play. There are too many other things they can do if they are not getting instant success."
Pass or fail
"In the athletic world, in the minds of the public, you either pass or fail and it's not a fair test," said Holmes. "Many times you are not even on an even playing field. Look at it the other way. (What if) in the classroom you either get an A or an F and the odds are 50-50. That's pretty harsh judgment.
"You get individuals who point to athletes who have messed up. I could point to an individual who has had 12 years of school and had English every year and has a hard time reading. I'm not going to condemn English because of one individual. I don't care what the program, you will have failures and successes."
Responsibility
"You have the three Rs -- reading, 'riting and 'rithmetic. But the most important R is responsibility," said Holmes.
"A person has to accept responsibility for their actions. If they feel responsibility they are much more likely to consider consequences before they do something.
"If the results are negative and they get out of it by blaming someone else, then they won't stop and think of what kind of hot water they can get into.
"I have appeared in court with some players," continued Holmes. "But it's not to minimize what they did or to seek to reduce their punishment. You don't abandon friends; it's strictly support, not an excuse for what they did. You still expect them to take full responsibility.
"Like they say, if you're going to dance all night you better expect to pay the fiddler."
Coaching
"As long as they keep paying me Social Security and I don't have to go back to work, I'll coach," said Holmes, who is the defensive line coach for the Raiders.
"Now I'm able to listen to (Scearcy) and that's a pleasure in itself. Lowell is known for baseball but it's a little-known fact he's one of the sharpest football coaches I've ever been around. He's also a stand-up comedian and keeps you loose on the practice field."
Holmes said he is glad he is in the coaching fraternity.
"You go through things together. You go through adversity together. You hang in there together."