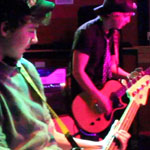 Central Lakes College honor students, Spencer (17) and Andrew Olson (20) of rural Emily are the subjects of a May 3 MinnPost feature "Rural Minnesota: A Generation at the Crossroads," by Steve Date. They live in a general store their parents bought a couple years ago, have been playing music professionally for over five years, and created their own recording company: Amerimine Records. Spencer has his own computer animation enterprise with some examples on YouTube. Andrew is a Pequot Lakes High School graduate and Spencer, a PSEO student at CLC, is a senior there.
Those wanting to see the band in action (for about one hour anyway) may catch the the Olson brothers (aka The Danver Patients) on  Tuesday, May 15 at 8 p.m. in the Pequot Lakes High School Auditorium. They are performing in a fundraiser for the PLHS band. Admission is a $5 donation to the high school band. The event includes a 7 p.m. performance by Robbie Newton. The Danver Patients ensemble is self-described as "a no-nonsense junk punk band from Minnesota that rides the edge of being too noisy and strays away from being boring." The name is derived from Danvers State Hospital, a former  insane asylum that is supposedly haunted. The band has a sound that is compared to Jack White, Rage Against the Machine, and Green Day. The trio includes Spencer (bass and vox, Andy (guitar and vox), and Garrett Jarvela on drums. Garrett is a graduate of the CLC Natural Resources program.

The MinnPost feature, including the Olsons' video tour of their operation, can be found at
http://www.minnpost.com/rural-minnesota/2012/05/olson-brothers-making-music-and-connections-north-woods#.T6Ks6QKj-Js.email
The band's page is  https://www.facebook.com/thedanverpatients
Spencer Olson Films page: http://www.youtube.com/Olsonstudios
Posted by CLC Public Information Specialist