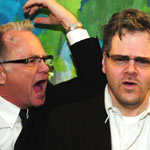 “Art,” a witty Tony Award-winning play, will be performed by three local actors in Dryden Theatre on the Brainerd campus of Central Lakes College, Brainerd, April 26-28 at 7:30 p.m. Presented through the Cultural Arts Series at CLC, the play features the talents of Erik Steen, Dan Rohr, and Patrick Spradlin – all veteran actors from the Brainerd area. Spradlin is also coordinator of the series. “Art” explores the questions of what is art, what is friendship, and on what canvas and with what media do we draw the lines of our relationships? It was written in 1994 by Iranian playwright Yasmina Reza, originally in French.
“Art” played on Broadway for about 18 months in 1998-99, with a cast that included Alan Alda (Marc), Victor Garber (Serge), and Best Actor Tony nominee Alfred Molina (Yvan).
Serge has bought a painting. His friend Marc cannot believe he’d toss away good money on such a thing. Mutual friend Yvan tries to keep the peace between his increasingly belligerent friends. Can a piece of modern art bring the end to a years-long friendship?
Sections of the play are dialogues between two characters, several are monologues where one of the characters addresses the audience directly, and one is a conversation among all three. At the beginning and end of the play, and for most of the scenes set in Serge’s flat, the large white painting is on prominent display.

Tickets are $10 per person or $5 for CLC students (with student ID). Seating is general admission, and this show contains adult language.
Posted by CLC Public Information Specialist