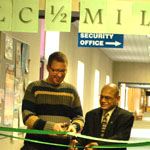 Steve Sabin, president of the Brainerd campus student senate at Central Lakes College, saw his pet project realized Friday, March 30, when he cut the ribbon to officially open the CLC Half Mile Walking Trail. The indoor, two-tier pathway is marked by signage from the ceiling to show both Easy and Intense loops through the spacious hallways of the campus. Dr. Suresh Tiwari, vice president of academic and student affairs, joined Steve in the ceremonial slice. Brainerd Mayor James Wallin praised the effort in remarks covered by Lakeland News reporter Becky Parker, who aired the inaugural walk on the evening broadcast by the public TV station serving the northern half of Minnesota. About 60 walkers of all ages made the first lap, and several others continued on with the stairs lap to sample the higher-level work-out. Steve, a nursing student, designed the indoor path as one way to help the community lower the incidence of Type 2 diabetes and generally improve the physical condition of those who exercise. He notes that walking lowers medication usage, lowers the risk of breast cancer and cardiovascular disease, blood pressure and bad cholesterol. Steve offers these suggestions for walkers: Stand tall, do not slouch forward; prevent tension by shrugging shoulders as you pace; consciously tighten stomach muscles; step down heel first in your gait.
Photos: http://www.flickr.com/photos/58518185@N04
Posted by CLC Public Information Specialist